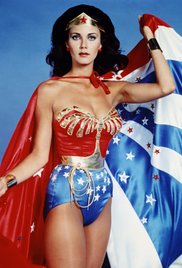 Raise your hand if you spent any part of the 1970s spinning around in your living room, hoping that this time, you’d gain superpowers, a golden lasso and maybe an invisible jet. Watching Diana Prince (Linda Carter) beat up the bad guys and save Steve Trevor (Lyle Waggoner) again was very fulfilling and set me up for two decades of disappointed TV watching until the mid-1990s came around and Wonder Women’s spiritual daughters, Xena and Buffy, appeared kicking ass and dusting their enemies.

And while Linda Carter will always be Wonder Woman to me, the new DC comics movie is coming out this spring, with Gal Gadot in Batman v. Superman: Dawn of Justice. Given that Gadot will be in the solo Wonder Woman film in 2017, I have hopes that the actor, writers and directors step up to the plate. I had always hoped for a Joss Whedon written/directed film with Lucy Lawless in the title role, but such vain hopes were not to be.

I still want some bullet-repelling bracelets in case I need to travel outside of New England, but I suppose if they were out there on the market, the NRA would try to make them go away.