According to Wikipedia, “On July 12, 2015, Breathed posted to his Facebook page a photo with the caption ‘A return after 25 years. Feels like going home.’ The photo showed him drawing a comic strip with the title ‘Bloom County 2015,’ with Opus pictured in the first frame.” Six months later the page has more than half a million likes, in part because Breathed is back with not just on-target political satire, but also, let’s face it, sweet, naïve Opus, our favorite penguin (because yesterday was national penguin awareness day, after all). Also, since he is not limited by a newspaper’s requirements, he can use color whenever he wants, not just on Sundays.

And when he can go from Ziggy Stardust to actual stardust, this man needs to be our Poet Laureate. 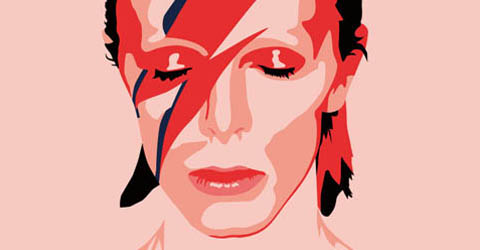 I am not going to pretend that David Bowie changed my life, but I will say that his advice in the song “Changes” to “turn and face the strange” seems like just as good advice for the new year and the changes it is bringing us, both the expected and the unexpectable, as for anyone facing the biggest change of all, as he just did a few days ago. In the end, even small changes can feel like small deaths; we don’t know what we are stepping out into and whether the ground will hold us. We think we are going out there into the future alone, but that may not be true. Anyway, for the sake of 2016 for everybody, here’s hoping!