So yesterday I worked with an MIT engineer on his thesis about the Fukushima Daiichi Nuclear Power Plant that suffered a severe compound accident from the tsunami that hit eastern Japan on March 11, 2011. One of the theories of thinking and reasoning that underlies some of his research is the idea of mental models, “that the mind constructs ‘small-scale models’ of reality that it uses to anticipate events. Mental models can be constructed from perception, imagination, or the comprehension of discourse” (Johnson-Laird and Byrne). I used this idea when I was writing my theology thesis about environmental survival, and it often comes up in cases where survival is at stake: people have to make crucial decisions at high speed in real time and they rely on their picture of reality, which is itself a) a form of perception, b) usually an oversimplification (occasionally the reverse), and c) affected by language, custom, and other symbolic attributes in addition to our lived experience.

That perception ≠ reality is shown in part by research that shows how inaccurate eyewitness testimony can be in court. “Many people believe that human memory works like a video recorder: the mind records events and then, on cue, plays back an exact replica of them. On the contrary, psychologists have found that memories are reconstructed rather than played back each time we recall them. The act of remembering, says eminent memory researcher and psychologist Elizabeth F. Loftus of the University of California, Irvine, is ‘more akin to putting puzzle pieces together than retrieving a video recording’” Akowitz and Lilienfeld).

It is true public safety officers are trained to observe more accurately than the rest of us, and there are ways of retrieving testimony that are less likely to color the witness’s recall. However, for my purposes here, that is less useful simply because in an emergency situation—a nuclear accident, 9/11—what an individual will be doing is not recalling What Happened Then but rather What Could Possibly Be Happening Now. The former is based on a single instant of reality and the latter is based on All the Reality I Have Experienced Up To Now, taken together, sifted, and drawn on the blueprint in the person’s head.

Think of the house you grew up in. Then think of all the houses you have ever seen from the inside or the outside. Then tell me what a house is. If you grew up in the suburbs, a three-story house or a Roman villa won’t be part of your picture. If you are M.C. Escher, this might be the house you draw for me. 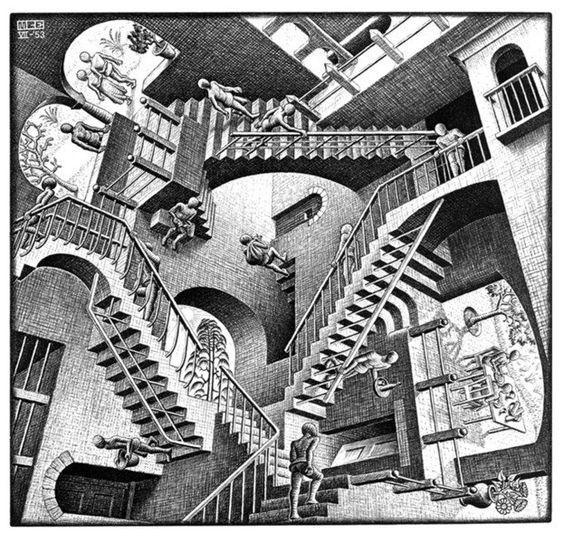 With an overcomplicated mental model, you might withdraw from action—why try to get down 80 flights of stairs? I will never make it. Social problems, which are indeed multiply constructed, frequently face human inaction for this reason.

If you are a child, this might be the house you draw for me.

The trees out side the house will have brown bark rather than grey and green grass rather than winter yellow, even if you just ran across the yellow grass and climbed up into the grey-barked tree just yesterday.

I am not sure why I am even writing about this although I expect it has to do with Valentine’s Day. I have written before about the problems of love poetry for a writer who wants to be taken seriously, although I don’t think I specifically addressed the problem that poetry causes for us in our expectations about love. But I have a feeling that this is a thing.