So I have been noticing a pattern in my TV/Netflix watching lately: in addition to hot male leading actors and characters who love each other (Firefly, Bones, Agents of SHIELD, Castle), apparently one of my prime choice factors is Badass Women in Combat Gear. So I decided to do a countdown, or rather, a count-up, of my ten favorite BWCGs.

So Number Ten is Erica Cerra, Deputy Jo Lupo from Eureka (2006-2012). The show had an interesting premise: imagine that MIT was actually a secret town in Oregon, and much, much funnier. Then add a handsome and perplexed sheriff to keep people in order. And because of course a handsome white man with police experience who rides into town automatically gets the job of sheriff over the hot Latina deputy who is probably more experienced and right for the job, we also get Colin Ferguson, Sheriff Jack Carter. Now I have to admit that Ferguson is easy on the eyes, but for some reason nothing makes a SWAT uniform look better than Erica Cerra. And despite Lupo’s affections for Absurdly Large SciFi Weapons, the character was interesting and likeable, although because television is what it is, when she finally ends up with a romance, it ends up being with the third least attractive man on the show, go figure. 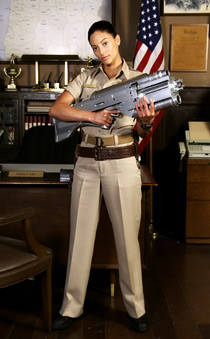 One comment on “Psycho Sunday: Badass Women in Combat Gear #10”