As a writer who is also a Christian, I find I think about Passover and Easter as being about the Story. We tell the stories of Exodus and the Passion of Christ at this sacred time of year to remind ourselves of who we are. That is what ritual is for: we eat specific food and tell specific stories and sing specific songs and we know ourselves as a people descended from the people who chose those foods, stories and songs, gathered or invented them and gave them meaning.

I think of this in the context of the popular cultural narratives that have been occupying my thoughts these last few weeks, in particular, the two separate and very different first century CE localities of ancient Greece and Rome, brought to us by Renaissance Pictures, Rob Tapert and Lucy Lawless, Spartacus: Blood and Sand and Xena: Warrior Princess. The more recent Spartacus (2010 to 2013) was about men (and women) bound to the gladiatorial arena. It was about despair and meaningless death. In contrast, the earlier XWP (1995 to 2001) was about changing one’s way and rising from death into something better. 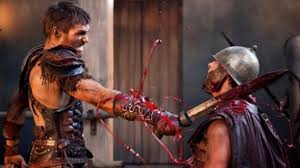 I have binge watched XWP more than once. I rented the DVDs of Spartacus once; while the half naked gladiators were nice, there is no way I would watch those shows again. They are too much like Quentin Tarantino’s Kill Bill, in that when blood sprayed across my computer screen, I automatically found myself throwing up my arms to keep the blood from splashing across my face.

I think about all this now because of the two major interpretations of Christ’s death and resurrection. There are people who talk about Christ’s dying for our sins, as if God was so pissed off with humans that he (it is always he in these readings) needed to kill his own Son to make up for our sin. Weird shit, that. In contrast, a more liberal reading says that humans killed Jesus, but God the Father/Creator/Mother resurrected him to prove to us lame humans that death is not the end, that God can overcome this enormous problem.

So when I look at the stories I use to constitute my identity, I often choose the ones that are not about characters trying to see how much they can get away with but about characters engaged in rescue and redemption, rather like the Jewish idea of tikkun olam, the repair of the world. It is an ongoing project, a battle that never is entirely won. All you can do is stay on the road, take good friends with you for the journey, and keep telling yourselves the stories that remind you who you are, and how strong you can actually be.

3 comments on “The Stories We Tell and Live Into”