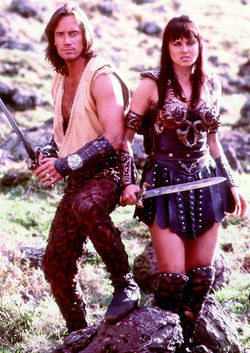 So I did not make it quite as far as Troy this week, alas and alack. Instead I found myself working on FanFic or perhaps FanEpicPo instead. These two poems comment on Xena Episode 1.8 Prometheus. The first speaker is Hercules and the second Gabrielle. It is a start.

“You‘re not much for girl talk, are you?

Your friend is right. You are not like most, whether

To the surface, a tool to be saved, and used

When the time of danger comes, and returns,

And returns, and returns. At a moment’s notice,

You turn it outward, with glee, a strange set

Of companions to hold in your heart. We made

A pretty good team once, too, the son of a god

And the daughter of an innkeeper, turned warlord,

Then reformed. I hear you’ve been helping people

To find your purpose. So yes, I do believe

The world needs you at least as much as me.

I will not see you sacrifice the life I helped turn

To the service of the world, not now. You mean too much

To me. It is easier to hold up a wall of rocks

On my back than to change your mind when you

Have made it up. Any other time I would find that

Admirable, but now you are risking your one, sweet

Life when I could do it for you, save the world

Without your cold corpse haunting my days.

Selfish? Yes, but sometimes I wonder if

We shared a soul once. And if I can do

Anything to prevent your untimely death,

That would be a labor worth undertaking.

Sometimes I wonder what she sees in me.

Sometimes I think of that story Plato wrote

About the people with four legs and two heads

That Zeus got all upset about and split

With lightning bolts, leaving us all asunder:

Only two legs, one head, and half a soul.

If, when Prometheus was rebound and doomed

To have his liver eaten by foul birds,

Fire and healing. Then what would it mean

If some heroes saved him? What does it mean

That she lets me travel with her, unable

To help with her adventures? It is intimidating,

A female Hercules. The sword is one thing,

But backflips and double kicks? I have begun

To write it all down, as Homer did for Achilles

And Odysseus. More people should know of her

Brilliance. Too, I sometimes wonder, if

Saving Prometheus will bring us back our fire

And ability to heal ourselves, what would we

Gain if she ever found that hero, the one

Who somehow in another human body holds

The other half of her enormous soul?

3 comments on “Inhabiting the Xenaverse”