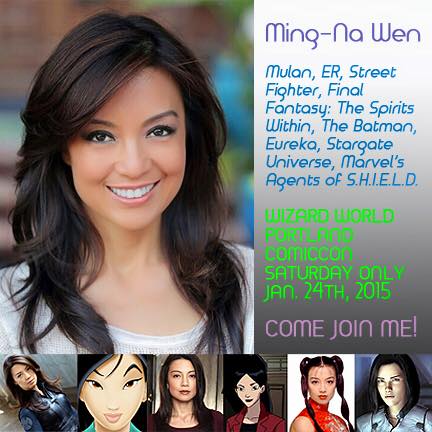 Thinking about heroes and kickass women on the day before Agents of S.H.I.E.L.D. comes back to TV from its winter hiatus naturally has made me think of another unusual piece of sheer poetry, the actor Ming Na Wen, who plays Agent Melinda May, also known as The Cavalry. You might recognize Ming Na’s voice from the Mulan movies and her face from The Joy Luck Club and ER, among others. But this gorgeous 51-year-old Chinese-American actor (and martial artist) is now playing the Best Role Ever. She gets to deadpan everybody and then shred the enemies and then say something terse, like, “Wheels up in ten.” And go off to fly the super cool black spy plane that now has cloaking.

Best yet was an episode last semester in which she danced with Clark Gregg and then fought a clone of herself. I have seen some cool martial arts choreography, but this fight totally rocks. She and her stuntwoman must have been EXHAUSTED afterwards, and probably a bit bruised.

Another great fight scene was at the end of the first season, when her casual love interest, fellow SHIELD Agent Grant Ward (played by handsome Brett Dalton) turned out to be a spy for HYDRA, a Nazi-originated secret organization out for, you guessed it, world domination. Thing is, you do NOT betray the Cavalry. She. Will. Waste. You. Possibly with a nailgun, among other things. The following video is a fan tribute video of May’s badassery.

4 comments on “A Ming of Beauty”