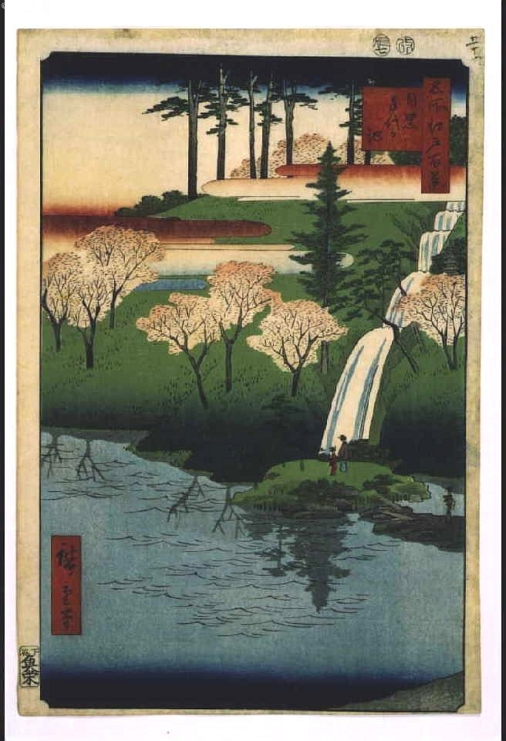 When I want to write and have no ideas for topics, I often turn to visual art, particularly, as I mentioned a while back, Japanese woodblock artists like Hokusai. A few days ago, as I was digging through old journals that I was published in, I found a poem I had forgotten about that was based on one of Hiroshige’s pictures that I could not remember. So I went and dug up my Hiroshige books, couldn’t find it and so, of course, requested some books from the library. And I fell in love again.

Ando Hiroshige (1797-1858) worked part-time for many years as a firefighter at Edo Castle, so those of us who are artists with day jobs shouldn’t feel too alone!

Greatly influenced by Hokusai, whose landscapes were wildly popular, Hiroshige produced Thirty-six Views of Mount Fuji and Fifty-three Stations of the Tokaido Road, but it is the series One Hundred Famous Views of Edo, that he did towards the end of his life, that I like best. (Edo is the old name for Tokyo.) In this series, he used bright colors and vertical orientation, often with some larger piece of what I would normally think of as background in the foreground and large, like a tree branch or a banner, so that you have to look harder to see the people and figure out the story that is playing out. The following poem appeared in Ekphrasis and was nominated for Pushcart Prize XXIII: Best of the Small Presses in 1997.

The Mother Takes Her Teenage Daughter to Chiyo’s Pond

Little One, we fold too many stories

between silk and our hot skin, we coil

too many expectations in our hair,

pinning them with pointed lacquer hopes.

Long ago, Lady Chiyo made this pond

of love for her husband, killed in battle.

These cherry trees did not grow here back then.

Had their pink branches rustled above her

slow steps, they might have taken her to task,

and whispered, Here we stand in the bright air,

resplendent and giving ourselves despite

the approach of wilting summer and the falling

rains. Look at their smoky reflections

And you, with your young warrior now gone,

have lost, you think, your future blossoming.

Why not, you ask me, simply float and fade?

Look up! See the water throwing itself

down into its own wet element in steps

clear white and frothing as the very day.

Your aunt, walking behind us, would say, This

water is your starting place. Begin

to wash out expectations, not drown hope.

Your brave one is dead, but another walks

Still water does not suit you. Remember him,

but throw yourself, my daughter, into life.