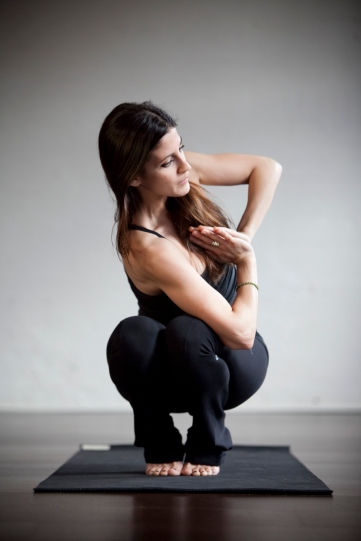 Okay, yes, I have asserted most forthrightly (if that is a word, which I am pretty sure it is) that There Is No Muse. And that is mostly true. At least 98% of the time, there is no gowned goddess who will descend upon your writing table To Inspire You.

I am not saying it happens often. But, for example, back at the end of May, my friend Amanda and I made a pact to take one or two exercise classes at our gyms. I dove in headlong. I took a Zumba class, which was frustrating, exhausting, confusing, loud and sort of fun, in a where-is-my-inhaler kind of way. Then I took a “spinning” class and found out why padded bike shorts are a Really Good Idea. (“Stationary bikes,” Elaine, the instructor, confided in me afterwards, “really weren’t made for girl parts.”) Then I took my first yoga class. Enter Erica.

The classroom was maybe thirty feet long, with a mirror along one side. A student showed me where to get a purple mat and two big blue foam blocks. Then this small woman came in wearing a black tank top and black yoga pants. She adjusted the frigid air conditioning, connected her iPod to the room’s sound system and took a block to sit on at the front, quietly greeting the people she knew and introducing herself to the rest of us. She opened the practice with seated meditation and then we began.

The names of the yoga postures are interesting. Some are very old, like shavasana, Corpse pose, and katasana, Chair pose. Others, like Happy Baby and Airplane, must be new interpretations of ancient postures. Some are obvious, like Tree, and others not, like Half Pigeon. (I still don’t know if there is a full pigeon.) We moved from one posture to another to gradually stretch, bend and wake up the entire body, all the muscles, all the joints. And because yoga is meditative, we paid close attention to our breathing. (“Take a deep breath in, and a long breath out. Good job.”) I haven’t always been good at meditation, so I’d feared the yoga my friends raved about would be tedious. It was anything but. And though we only held each pose for five seconds, when the hour was up, I had stretched every muscle in my body. Such a simple set of exercises, yet my sweat dripped onto the purple mat. And Erica did them all with us, modeling the right alignment as she explained how to do each one and what to avoid.

My balance was not very good at the start and I frequently mixed up my left and right. But Erica’s voice was a golden thread calmly guiding us, saying things like, “This back stretch is a good counter-posture to too much texting” or “It’s nice to stretch your beautiful feet.” Or, towards the end, when she had us stretch out in shavasana (and I was thinking, “Sure, lie here like a corpse, that’s positive!”), she said, “Let your feet splay out and let your hands face palm-up, in a gesture of receiving. And relax, without needing to do anything, by means of shavasana.” That is when I realized there was more going on there than I imagined.

I took other classes with other yoga teachers (including one who kept us in postures for a long time but did not do them herself), but I kept returning to Erica’s class. She would say things like, “Gently stretch your forearms. So good! So healthy!” or “Let your heart open to the sky.” She could have said, “Open your chest up” or even “Open your heart to the ceiling,” but she didn’t. The idea that good posture could mean that my heart and the sky could have a connection is, to me, astonishing. I don’t think I have ever before met anyone who speaks poetry in real life, sincerely and without irony, to communicate to ordinary people about the beauty of their feet, their lives, their world. For me, that is a good portion of what poetry is for.