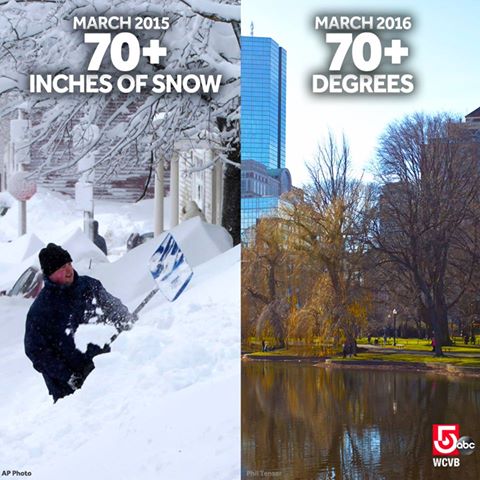 It took a year-plus to relieve the trauma we recall

From last winter that pounded us with seventy-plus

Inches of snow. It took an unseasonably mild winter

To counter the instant dismay caused by a sky greying

Over like ice over broken tar. We paused, tensed,

Refused to panic. We checked our shovels. We relaxed

When we realized that the 36-inch forecast meant

An inch or two, though wet. We still shudder to think

Of the wall of snow on every sidewalk, the wall that made

How cold we were. We still shiver. Last July, I heard a man

Talk about how he still couldn’t believe the snow had melted.

When the summer was mild and I was not melting

I shivered, but not as much as I am shivering this winter,

This mild, mild winter, when Christmas is 70 degrees

And it’s snowing at Easter, and no one really knows

How to forecast the future, how to predict weather:

But to all the summers to come, both those now

When I squander my forties and those later when I, 70-plus,

Look around at the 120 degree heat, and learn despair.

6 comments on “When I Am Seventy-Plus”